Hot with Blemishes in May

I believe that I misunderstood the question,

Reversal. Speak of the devil, Listen of the God, the motion of Mass.

I am surrounded by nothing, but the time is now short. Infinity so quick. I must hurry. There is nowhere to go. I’ve been demoted, diagram of this. People feel confused by drugs only when they notice their effect. The air is clean. Huddle together closely for we are all to die. Momentarily, is the word by which mortality hangs its hat. By-product of the overwhelmed. Evil is a trick. Gotcha. And the old man said this part slowly, as if he was pulling a thought from his finger and his swollen arthritic joints couldn’t squeeze the words through the last vestiges of his cartilage. That which we share with the shark (had the shark instead bitten his hand, the words would have flown freely, albeit he would carry no staff.) is that which we fear to lose to it. And his robes twirled, and the child’s tunic shivered in response, ‘Come’ come and say, as you went, and as I will go. Here the rock fell from the stump, and he muttered ‘Blood’, ‘Blood is also eye, tooth, skin and bone’. Then she touched his thigh gently, and whispered, ‘Poor old man, hath no woman known your soul?’

What was I talking? 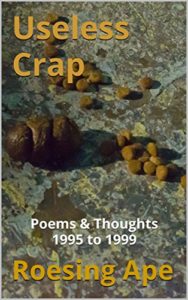