[In this play, every character should be of a different ethnicity. Maybe even with thick accents. Scene opens on a jagged wall running the length of the stage (upstage) in front of which the action in scene one takes place. The wall has at least one indentation that goes back like it was another room. The walls are covered with a hodge-podge of blown up images taken from tide boxes and advertisements and porn magazines, for instance, a large picture of a happy woman smiling and holding a clean shirt, next to a double penetration shot in full color. The floor is littered with boxes, watches, and dryer sheets. There is a television set into the wall stage left playing the home shopping network. The lighting is bright and fluorescent. Maybe there is a periodic flicker. There is the faint sound of ticking in the air, and the hum of a rotating dryer. Center stage there is a beige, round kitchen table, with a plastic and middle class look about it, there are three matching roller chairs. On the table there is an open bag of potato chips, an open can of coke, various meaningless papers, and a number of prescription pill bottles. As the scene opens a large black dog walks across the stage left to right, a moment later, Jan, a semi-crippled woman in her late fifties suffering from advanced rheumatoid arthritis rambles onstage on a crutch in a flowered, disheveled house dress, and takes a seat at the table, begins to methodically eat chips, look at the papers, and occasionally take a pill with the coca cola. She occasionally coughs haggishly. When she speaks it is a high pitched and whiny voice. ] 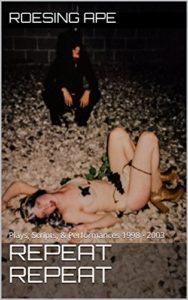