There once was a poop. And in this poop everything stood still, as if concrete blooded itself, or rather blood concreted itself. The aqua-ducts flooded with concrete poop to still the very soul of nothing reading bridges of the solid guitar sound what the fuck. When doors eat berries, windows turn red. Leopard skin pants on a teenager already chunky like a 22 year old flush with legal alcohol. Fake leopard. Like veggie burger. Like tofu dog. Like straight teeth. Faking having something you would be embarrassed to have if it was real because it makes you feel sexy. Talking like they have heard people talk on television. My word processor doesn’t recognize t.v., tells me it’s spelled wrong. So I have to fucking write out the word television so as I don’t feel guilty.

I just spoke to someone. Very boring. The only thing keeping me going is my sex drive at this point. Everything is doomed to failure. Fucking meat eaters. I write out to worship. The worship enfolds my pink desire. The desire passes out cake like refrains from old melodies. The melodies strike lightning flowers into the floor, expanding the square footage base of the building by eleven inches. Potato bugs fretfully readjust. Madonna makes her pop way into my mind, is forced out by Tori Amos, who is forced out by my next drink of coffee. Smoke pets my eye with another forgettable exhale. Tears are not falling from my eyes, but I know the ability and potential lurks. I have the ducts. Miniskirts threaten my artistic integrity. Bitterness reaches out to them as well, a silent inward traitor that it is.  Smoking has destroyed most of my sense of smell, but hints of character drift around me. Bitterness at the freedom from the novelty of a woman’s body. The crowd’s energy surges, surges like little pieces of oriental paper, blotchy translucent scraps in an avant-garde inanimate theatrical play, acting like drops of water in a floating, weightless sea.  They’ve come so close, a crowd, a group, has formed next to me. My bile boils my senses recoil, I am invaded, they stink, these ignorant uncouth moronic white hat culture fucks from some fucking soft suburb walking around like I did with erections in hand and insecurities stuffed in their pants where the erections used to habitually live. Smoking like newbie fucks who don’t know yet the proper rate of inhales, the proper breath holding time, nor the comfortable and natural way to hold a cigarette. Harshing my Mellow. I am really trapped. Fucking sandals. They talk about drugs. I love drugs. They stomp. Their entire basis for communication (like mine once was) is based upon the diversion, direction, absence and presence of attention. That rare commodity. That quickest high. That most evil intrusion. The intrusion that butt fucks the goddess cerebellum with its knobby coca cola red dot com bannered flagship of cock. The aggression. The swelling. The penetration. The release of attack and little death. The break. 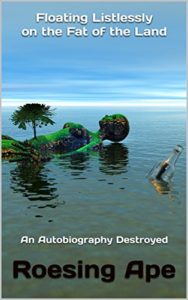