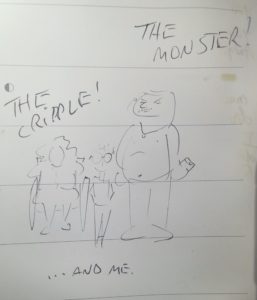 Weird keyboard music plays. There are sounds of men yelling and things crashing. Lights come up on two curtains pushed inward meeting at a 120 degree angle center stage, where there is a toilet. On both sides at eye level are roughly symmetrical slits in the curtains, where we see eyes. In other words, there are two men one on either side peering through slits from behind the curtains, almost so that they can see in each other’s eyes. This should all be back lit. All the sounds stop with a crash. They tend to speak in monotone, with occasional outbursts.

Numb: Bien… The fundamental embarrassment which it, the boy, thinks emanates from his birth, reflected onto, even focused into, his mother, the what have you originator of what it, the boy, finds to be, albeit in a weak surmising, the embarrassment itself, or it, him, mind you.

Numb: Well I think this whole thing is stupid.

Mob: It’s forced. I take the part of the young man.

Numb: And I will take the part of the old woman.

Mob: You’re a complete fat waste of flesh that ruined my personality almost methodically, in concert with the vast commercial deluge, visual flashing deluge of sick desire flooding out of that box that you set before me and into to my heart, before I was even five years old.

Numb: We gave you a good life, other children would have killed to have all the advantages that you’ve had. All the toys, the safe neighborhood, good schools, I took you through five different schools trying to make you happy.

Numb: You’ve got to realize how much we love you, we’ve done the best we could. (they begin to take on a mocking tone) You had…

Mob: I didn’t have shit except a bunch of fucking crap I didn’t need, toys and TV to distract me from the fact that my father was an abusive jerk and my mother was off fucking god in a hospital bed hoping for a cure, when all it would have taken was some exercise and less junk food!

Numb: (dropping out of character) I think you’re a little too angry.

Mob: Well you’re not complicated enough. (a large fat bald man enters and goes to toilet, where he urinates, this seems to interfere with their speech)

Numb: The, the, what we, we, we question, is the fundamental question of responsibility, no?

Mob: (man finishes, exits, speech improves) You know this really isn’t like Beckett at all.

Numb: We are talking about the passage of abuse, aren’t we? Through generations, in a non-realistic, abstract, non-linear way.

Mob: Well, for example, how much like Williams is Isben?

Numb: Well, in that example, exactly the fucking same. But, what, what, this isn’t the subject.

Numb: In that what?

Mob: In that both contain plots, subtle plots mind you, subtle relationships mind you, in that mind you, gritty, mind, realistic, you, dramatic, wherein that drama very little happens, or, and this is the thrust of it, is, reconciled, is reconciled, in that, ha ha ha! What they call, ha ha, that traditional, thpppt! Melodramatic, oh my god! Way!

Numb: And that this, and Beckett, are both non-realistic non dramas.

Numb: So what. What does this have to do with the mother monster and the child monster?

Mob: Well just think. If you, or, that which you represent, or, what was that, um, a disconnected entity viewing and commenting, or, a, um, implanted audience substitute in the presence of an audience, were to, go, to, see. A. Realistic drama, would you, think to yourself, ‘Oh look! A realistic drama! You know Williams and Isben did that!’

Numb: Um. No. (Jan enters, goes to toilet, lowers seat, urinates, all with whiny difficulty. Once again this impedes their speech)

Numb: Be, be, that’s, is, cause, because, it’s, it is, what you, would, expect, no, I would, I would expect because that’s what I would expect anyways Jesus H. Christ! You’re fucking up my through-line!

Pike: Would you close the door! My god! (exits left)

Mob: He just walked through…

Numb: I, I, you’re confusing this. (Jan is finished, exits)

Mob: No. Why would one expect realistic dramas?

Numb: Aren’t we supposed to be talking about something else?

Mob: Which aren’t even realistic, but a fake realistic, an idealistic realistic…

Numb: I want to try and keep the subtlety!

Mob: This is the subtlety!

Numb: Nonsense is not subtlety!

Numb: Well say it, and then tell me what the dog shit is about!

Mob: What do you dream about?

Numb: I don’t dream, I’m non-dynamic, I’m a character, I’m not even corporeal.

Mob: No. You’re an actor behind a sheet. No. If you were a person, and you were malcontent, what would you envision?

Mob: Oui, Oui! Which wouldn’t be real, being, being, an envisioning, a dream, what one would project…

Numb: What about the father?

Mob: …Project, I say, would be an unreality, disguised, as, a reality.

Numb: How is the boy’s relationship with his father? Was that him who pissed?

Numb: Does he hate his father as well? I’ll play the part of the old woman. (the curtains begin to shake and shimmer)

Numb: You must know how much I love you. I didn’t mean to hurt you.

Mob: Non realistic non dramas, the first step since the ancients towards the actual realistic surrealism that life actually is, is immediately…

Numb: I tried everything I could do to help and to make you happy. I fought with teachers, psychologists. Doesn’t my love for you count for anything?

Mob: Is immediately, I said, immediately related, lumped, with others of its genre in order to downplay certain peculiar relevancies it may have, by saying it has been done. But no one says that the realism has been done before, because realism is all the time forever, forever, it will always be real! This, this is, the, illusion!

Numb: I love you, my baby boy. (lights out, curtains down.)